If you cannot wait any longer for official rules & cards

What about creating our own cards & rules

Here are the 1st Equipments cards

[Sorry because of licensing, I had to remove artwork from 1 card few cards, searching for Public Domain or Creative Common with reuse autorisation]
So artwork may disappear if the author comes back on the Public Domain or Creative Common status.
Until now, only "Sic Won" confirmed the use as FREE rules...
https://www.flickr.com/photos/140933033@N05/

If Space crusade has been delyed because of missing artwork, perhaps Prodos could contact the photos owner to buy the pictures for commercial use.

If you find other picture/description idea fitting with "Prodos style" please tell me .
Just imagine a dozen of you make their own 5 or 6 card we will get a 60 cards deck.
By the way has anybody ideas for the cards borders and back-side?

no just impatient. Anyway, it

By the way, there is still nothing about Space Crusade on Prodos boardgame geek page
https://boardgamegeek.com/boardgamepublisher/24672/prodos-games-ltd 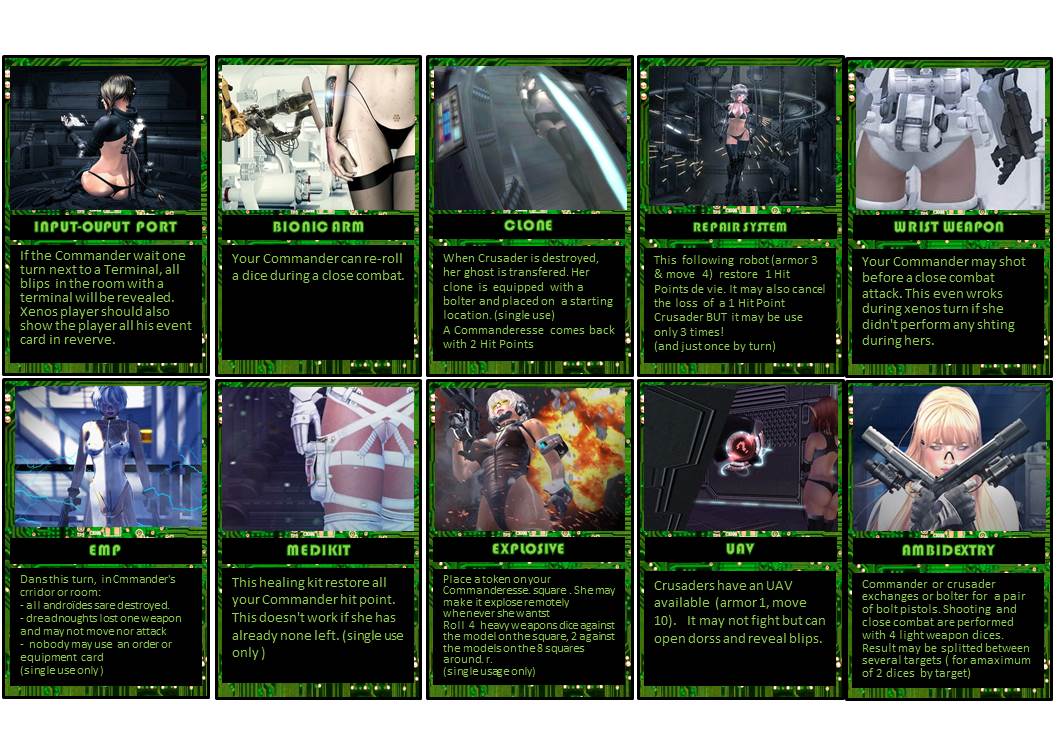 I think your pervert cards

I think your pervert cards

I think your pervert cards don´t fit to that game and/or forum. Just stop it! I love the love and sex, too but this is not the right place for it - only for AvP!

But this is not the AvP subforum! This is the Space Crusade subforum. Just saying.

Ah, thanks. Didn´t recognized it.

Well I understand your

Well I understand your confusion on a low res smatphone screen may appear like 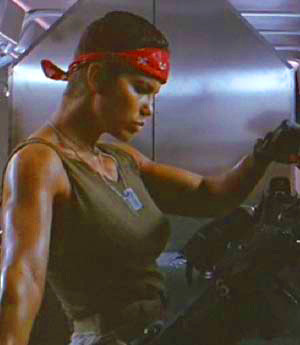 1st (home made) mission board

In this first Mission, the Crusader will discover the horror of the Mab's contruction.

While their primary mission is a classical search and destroy, the discovery of a capture bike + spare parts of destroyed one suggest that 2 Amazone could be held captive.

The 2ndary objective will be to free them.

However since they are both already in the sadistic transformation machine, only one may be saved (if the Mara is killed in one turn) giving the player an Amazone for the next mission.

For this mission you need
- 5 Crusaders (one could be a rocket-girl)
- 5 Maras (I know there are 6 on the map but since the 1st one should be killed to enter the base..)
- 3 Mabs
Devil Sluts (DS) is the common term to designate both Maras & Mabs

AUTOMATIC DOORS:
The 2 Maras outside possess access card so once one is killed, Crusader can open outside doors, the doors Inside automatically open when a model is place on one of the 4 squares around them and automatically close at the end of the turn when nobody is there.

-Outdoor
Because of the awful wind noise, the void, the mist or whatever the Devil Sluts don't notice the Crusaders even if they shot one of them. Only the targetted DS may react.
- Indoor
Neither sound nor radio frequency may "pass the door" until it gets open.
Therefore, as long as no Crusader open the door of a room, no DS Inside may be played.
When the door open, DS player MUST place them during the Crusaders turn them ONLY when a Crusader has a line of sight.

However, he CAN also place (and play them) during his turn; IF he WANTS to play them he MUST place them (there is no hidden move):
just consider that the sound of the door opening warn them of "somebody" presence even if the Crusader is not in the line of sight.

However in both case if one DS who actually had a line of sight of was attacked by a Crusader moves in the line of sight of another DS(i.e. enter in her room) she of course give the alert and this other one may be played

The game rythme is more like MB Heroquest than MB Space Crusade since all the assault force comes from asingle entry.
Therefore, for a similar bard size than MB SC, the exploring time is longer but not the game since in multiplayer there is still only one squad.

The mission itself is quite easy: the assault team regroup next to room door, blast in the room, search it then regroup in front of next room. at the end, the progression is a the slowest guide speed.

Except usual bad dice rolls occurs, mission was far too easy too be interesting.

As I didn't have plan anything for setting traps and mandatory stuff to discover (to force search that may result of trap activation)
I used MB alien event cards.
This gave 2 challenge:
- limited time for completion (the mission must be completed BEFORE all events are played to be considered as successful)
- the surprise attack (like Genestealer in MB SC or wandering monster in MB HQ) and traps (mainly heavy weapon shooting against the crusader team

This way the crusader player is submitted to a dilemna:
1) taking time to regroup before assault but then risking time over or at least suffering from more events
OR
2) risking unprepared assault, forgetting "treasure discovery" but suffering from less event and being sure of completing in time.

the most deadly event were:
- transformation in Chaos SM
- the 2 MB SC genestealer attacks

for the 1st one, just swap the Crusader mini with a Mara instead of swapping Space Marine by Chaos Marine
for the 2 one, I would imagine a Demonette rising from the ground or falling from the cellar, an AvP alien
but Warzone Golgotha or mourning wolves are definitively more sexy http://shop.prodosgames.com/dark-legion/37-golgotha.html
http://shop.prodosgames.com/imperial/173-mourning-wolves.html

but instead of 2 cards of close combat ennemy, I would prefer introducing some harrassing sexy sniper like an Imperial grey ghost http://shop.prodosgames.com/imperial/169-grey-ghosts.html but painted & converted
to make her look like wearing some vinyl catsuit like